Canary Wharf is synonymous with glass and steel towers, immaculate public spaces, a futuristic Venice housing the financial district of London. Thom Yorke, frontman of Radiohead, even wrote his song ‘Fake Plastic Trees’ about this area, painting an image of a place full of artifice built on a wasteland.

Though much has changed at Canary Wharf over the past 10 years. What was once a deserted urban landscape on the weekends, has now become more alive with cultural initiatives such as the annual Winter Lights Festival and Open Air theatre performances in the summer.

With the Estate regularly adding new pieces, Canary Wharf is considered to be one of the world’s largest public sculpture parks, hosting regular, curated exhibitions of their own.

Without further ado, here are some of the most interesting sculptures in Canary Wharf you should check out on your next visit.

Polish artist Igor Mitoraj is famous for his sculptures of fragmented bodies, reflecting his fascination with surrealism and classical Ancient Greek and Roman studies of the human body. Testa Addormentata, meaning ‘Head Lulled to Sleep’ is one of his most celebrated works, depicting a bandaged head with closed eyes. Although Mitoraj frequently deals with themes of fragility and darker aspects of the human condition, daylight reflecting on the surface of this bronze sculpture adds an ethereal sense of softness and peacefulness. His other large-scale works are on public display in many European cities including Krakow, Valencia and Barcelona.

Chadwick specialises in abstract figurative sculpture. His subjects are often characterised by thin, stilt-like legs and geometric shapes, something that has certainly been influenced by his beginnings as a trainee at an architecture office. ‘Couple on Seat’ is one of his later works, showing two figures, male and female, seated on a bench. The reserved position of the figures evokes feelings of tension, but also stillness. The artist works by welding together sheets of bronze. Another one of Chadwicks works can be seen on top of the canopy above the entrance to Fortnum and Mason.

Helaine Blumenfeld is most recognised by her public space commissions. Her large-scale works are mostly flowing abstract shapes that make the materials she works with, predominantly marble, granite and bronze, seem to have an inherent plasticity. ‘Fortuna’ is like a golden beacon in the middle of Jubilee Park, inspired by Fortuna – the Roman goddess of luck. Blumentfeld said “Some see it as an angel with its wings spread open, others as a tree of life, while some view it as hands reaching out in hope. But everyone recognises that this sculpture is about the positive power of beauty, of hope and of creation.”

This is another sculpture by Igor Mitoraj. The artist’s inspiration from antiquity and mythology are evident in the subject matter – an armoured centaur, ready for battle, a limbless, headless torso resting at the base and pedestal adorned with small busts of men. Fragmented parts of figures protruding from recesses in the sculpture are reminiscent of a surrealist artists Salvador Dali and Giorgio de Chirico. This beautiful work is one of three Mitoraj’s works on the Estate.

This sculpture is emblematic of the disconnect in contemporary society. Two men sitting on a bench turned away from each other, experiencing the world around them in a passive way, yet completely disconnected from the person sitting right next to them. The smooth bronze surface adds minimalist simplicity to the work and the blank facial expressions amplify feelings of lethargy. Giles Penny is a British figurative sculptor and you can see another one of his works ‘Man with Open Arms’ on the estate as well.

Not much is known about the mysterious golden egg that has landed in Westferry Circus. The title of this sculpture is Italian for ‘Cosmic Stone’. Its polished surface reflects surrounding plants and skyscrapers, changing with the seasons. The German artist uses Ancient Greek and Roman culture as inspiration.

Hugh Chapman’s drive behind the creation of his works comes from the desire to create a ‘positive psychological impact. The artists turned to sculpture and photography after sustaining a serious head injury. Unlike many contemporary artworks, often designed to be bold and attention grabbing, Growth Form’s elegance feels subtle and refreshing, more like the timeless works of the past. The simple abstract shape, reminiscent of a flower bud about to open, lives in harmony with the nearby nature.

Torsion II is like a spiralling flexible tower, echoing the skyscrapers it’s surrounded by. This unique cast iron sculpture has an intricate texture and an earthy quality, as if it was a rusted drill coming up from the ground. Hancock’s work is influenced by engineering and geology, often portraying a sense of dynamism and freedom. Another one of his works ‘Helisphere’ can also be found nearby.

The charming woman with a small, blocky head, also known as ‘Old Flo’ was previously residing in the Yorkshire Sculpture Park, before returning to London in 2017. Moore’s sculpture depicts a monumental seated woman draped in fabric, said to have been inspired by people taking shelter during the London Blitz bombings. The matriarchal figure is in a composed state of alertness, as if trying to ensure the safety of her children. Influenced by classical sculpture, the artist draws special attention to drapery, letting tension and slack in the fabric communicate the stance and motion of the human form.

The polished steel droplet of water is certainly a selfie magnet and one of the more recent additions to the collection. It’s like getting a small taste of Chicago’s ‘Cloud Gate’. The spherical convex surface playfully reflects surrounding towers and pedestrians rushing by. Hudson draws inspiration from natural beauty and organic forms. The mirrored finish helps to push the viewer into self-reflection and encourages to walk around the whole sculpture.

There is a lot more to see, you can arrange your own self-guided tour by downloading the Canary Wharf Art Map which lists 68 of the estate’s publicly displayed pieces of art. 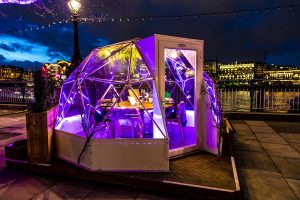 Post-lockdown Lowdown – Where To Enjoy the Festive Season in London